#16 Ronsley Vaz on Why Your Voice Matters

25 Aug #16 Ronsley Vaz on Why Your Voice Matters

Posted at 22:55h in Podcast, The Darin Olien Show by Ronsley Vaz 1 Comment 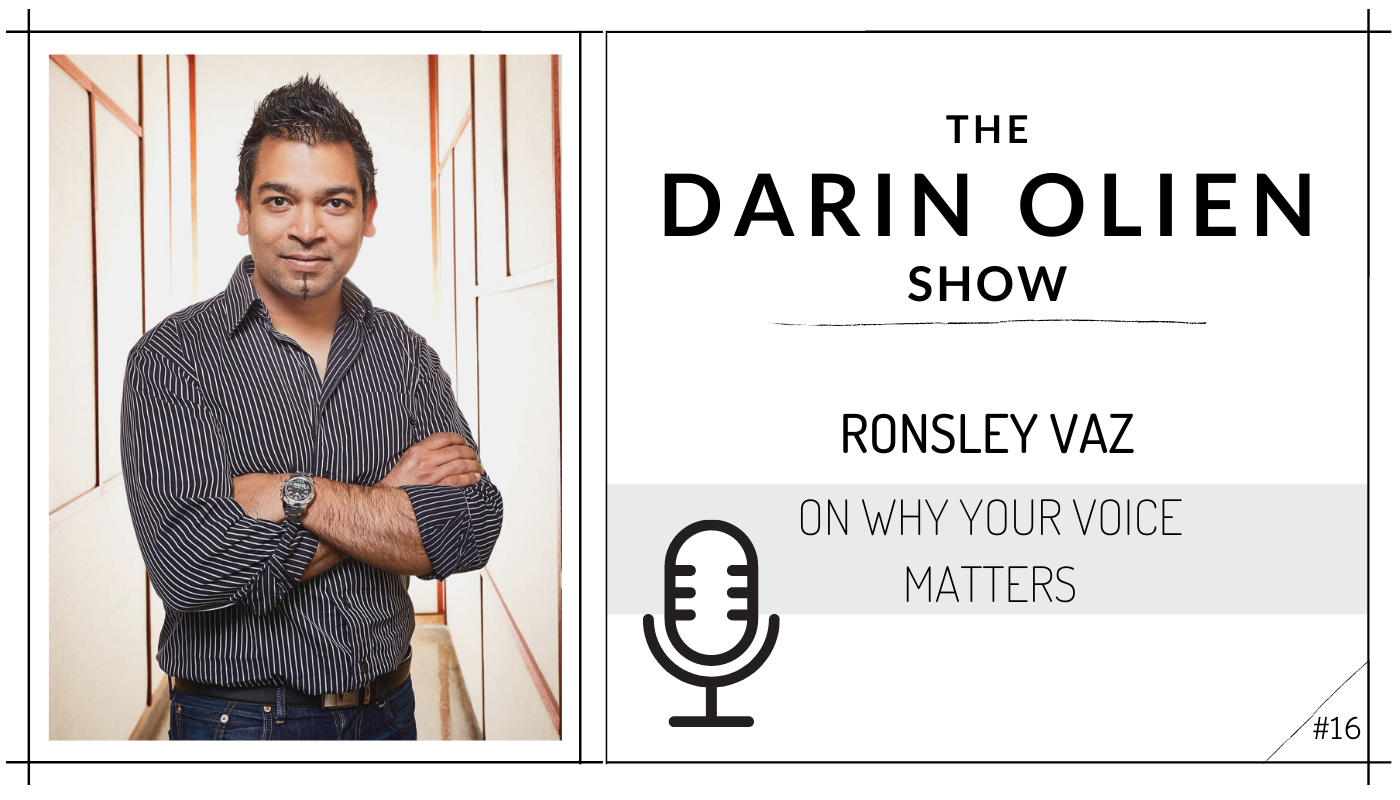 It can be scary to say what you’re thinking, especially in today’s divided world. We can’t let the divisiveness that surrounds us stop us from speaking our minds. It’s natural to be afraid, but say it anyway. Be courageous. Speaking your truth gives the people around you the unspoken permission to do the same. And that is powerful. Your voice matters.

WELCOME TO THE DARIN OLIEN SHOW,

On this podcast, you’ll hear me, Darin Olien, “the superfood hunter,” have inspiring and enlightening conversations with extraordinary people from all walks of life. Although our ideas and approaches to life may differ, our ultimate goal is the same- to save the planet one conversation at a time.

If you’re interested in expanding your view of the world by learning new perspectives on health, nutrition and healing the planet, and want to learn more about society’s Fatal Conveniences™- the things we may be doing because the world we live in makes us believe we have to, even though they may be doing harm- then this is the podcast for you.

Ronsley Vaz knows a thing or two about speaking his mind.

I am so excited to introduce this episode’s guest to you. Ronsley Vaz is the curator of the first audio marketing agency in the world, Must Amplify. Ronsley and his team produce this podcast for me, but he does a whole lot more than that. Ronsley helps people find their voice, and then he amplifies it.

Podcasting is so much more than having a conversation with someone you find interesting. It’s a way to get your perspective out into the world, and have others hear it and apply it to their own lives. It allows your listeners to learn from you, while you’re learning from them, and your guests. It’s such a full-circle way to bounce ideas off of like-minded, and not-so-like-minded people in order to see things in a new light.

Ronsley knows all of this, but he didn’t always. Ronsley started his business journey so far away from the world of podcasting, it might as well have been in another universe. In 2013, his dream of owning and running a restaurant had failed miserably- and left him almost $500,000 in debt. He didn’t stay down for long though, and quickly started a new business venture- connecting talented chefs with time-poor entrepreneurs who needed a little help preparing healthy meals for the week.

This then led to starting his own podcast, Bond Appetit, which quickly gained an audience of over 1 million listeners in under 4 months and became Australia’s #1 food podcast. The technical side of podcast creation was the easy part for Ronsley, so he was puzzled when others came to him for help starting their own podcasts.

Then he had a lightbulb moment.

Realizing he may have something to offer, he began selling courses on how to start your own podcast. It worked. He was able to pay off his massive restaurant debt in just over two years. The success of these courses led to his greatest project yet- Amplify, the world’s first audio marketing agency. Ronsley and his team help others find their voices, and he gives them a platform in which to amplify it. He’s done it for me- The Darin Olien Show is proof!

In this conversation, we get into the importance of speaking your mind. Being courageous enough to put your truth out into the world is never arrogant. It’s critical, especially now, to understand why your voice matters. Ronsley tells us all about starting his successful business and how it led to creating We Are Podcast, the southern hemisphere’s first podcast conference. He also gives us some scoop on his passion project, the audio docuseries The Psychology of Entrepreneurship. You’re not going to want to miss this one.

Other great bits in this episode:

Ronsley’s Book: Amplify: How to Raise Your Voice, Boost Your Brand, and Grow Your Business

Listen to The Psychology of Entrepreneurship

Netflix ‘Down To Earth’ Official Trailer