#54 Dr. Jerry Tennant on The Voltage in Our Bodies

12 Jan #54 Dr. Jerry Tennant on The Voltage in Our Bodies

Posted at 00:30h in Podcast, The Darin Olien Show by Ronsley Vaz 0 Comments

I want you all to envision using a blow dryer to style your hair. If there’s not enough voltage hitting your dryer, it’s not going to work. However, too much voltage and sparks will fly. Believe it or not, our bodies work the same way. Every muscle is essentially a battery. Without the right amount of charge, nothing is going to work properly.

I’m Darin Olien, the “superfood hunter.” On this podcast, you’ll hear honest conversations with extraordinary people that inspire me. I hope that through their knowledge and unique perspectives, they’ll inspire you, too.

Although our ideas and approaches to life may differ, our ultimate goal is the same. We want to save the planet. So we’re going to try, one conversation at a time. If you’re interested in expanding your view of the world while learning new angles on health and nutrition, you’re at the right place.

Dr. Jerry Tennant wants you to understand the voltage in your body. 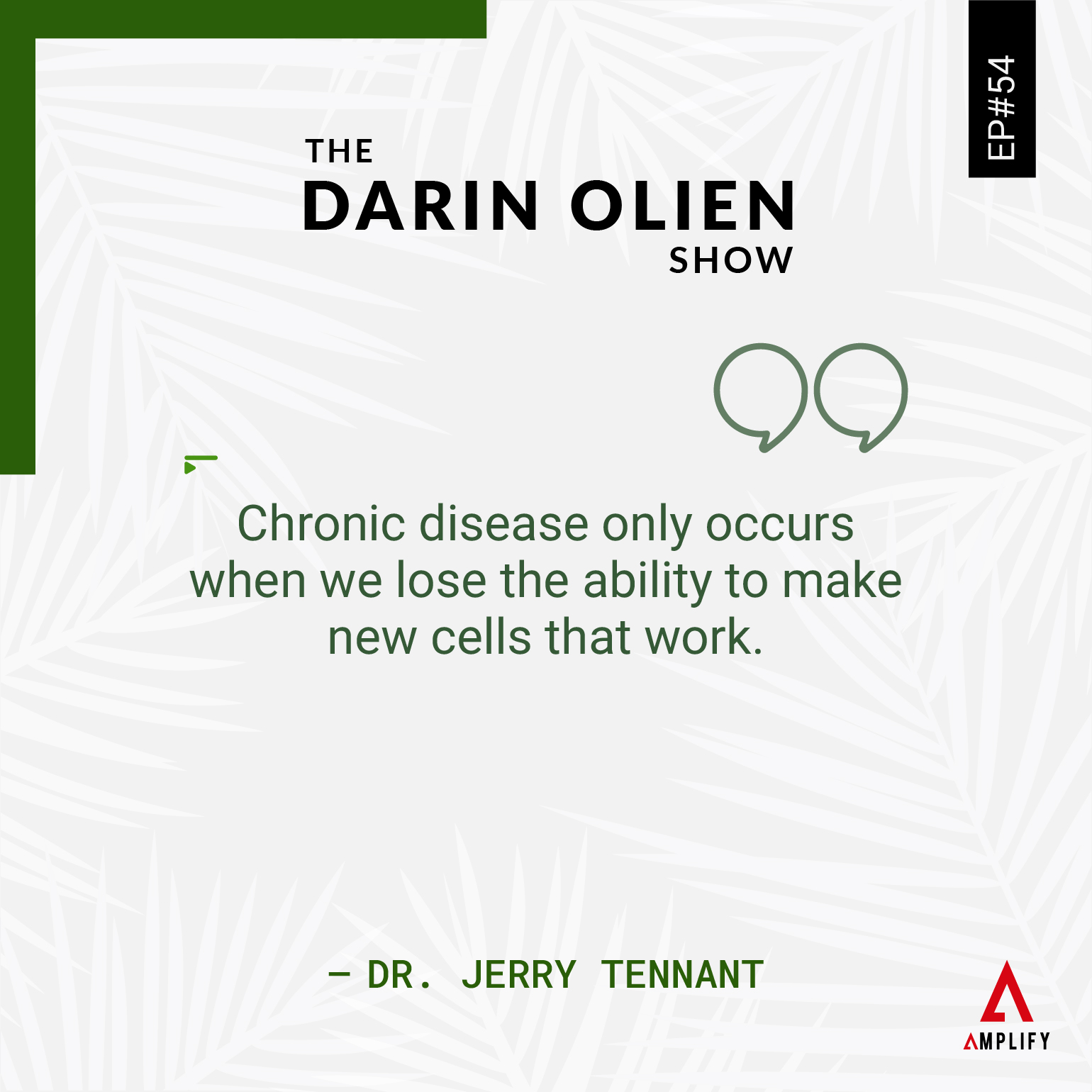 As a world-renowned physician, international author, and integrative health practitioner, Dr. Jerry Tennant, MD, MD(H), PScD knows his way around the human body. He is a Harvard-trained ophthalmologist and has performed complicated eye surgeries on thousands of patients all over the world. He is also the founder of The Tennant Institute for Integrative Medicine and was named one of the “Top 20 Alternative Doctors in America”.

It was his world-renowned talent in eye surgery that ultimately led to him contracting three different viruses in his brain. His health began to rapidly deteriorate which forced him into early retirement. For the next seven years, he spent most of his days sleeping. When he was awake, he was in a mental fog, unable to do much of anything. Top doctors all over the country gave him no hope, telling him there was no cure for his illnesses. He was left to figure out the answers himself.

Then Dr. Jerry discovered the concept of voltage, and everything changed. He learned that chronic disease occurs when the body loses its ability to make new cells that work. Through his research, he began to understand that loss of voltage in cells is directly related to the body’s inability to heal. As he studied this information, he began to heal his own body naturally. His career took a natural turn as well because this information has to be shared.

In this episode, Dr. Tennant breaks the very complicated concept of the voltage in human bodies. It’s very likely that this is the first time you’re hearing about this stuff, so it can be a bit overwhelming. I highly recommend heading over to Dr. Jerry’s website after listening to this episode and checking out his videos on the subject. There’s so much information to process, guys. But I promise once you catch on to how this stuff works, so many things will fall into place in your mind about your own body and health. I had like a million lightbulb moments about my own body once I stumbled upon his work. For example, did you know getting your wisdom teeth removed eliminates a key circuit connection to your brain? We talk about this and many other unknown mind-body connections. You’re not going to want to miss this one, that’s a promise.

Other topics in this episode:

Healing is Voltage: The Handbook

For amazing skin using an all-natural serum made with wild-harvested ingredients, get Caldera Lab’s “The Good”, the only skincare product I use. Use code “DARIN” for 20% off your first order!

The Darin Olien Show is produced by the team at Must Amplify. If you’re looking to give a voice to your brand and make sure that it’s heard by the right people, head to www.mustamplify.com/darin to see what Amplify can do for you.