How To Create Calm Using Breathwork

On average, we take 17,000 breaths per day. That’s the equivalent of 13 pints of air every minute. Although this may sound like a lot, for those of us who want to maintain a calm state, it isn’t quite enough. Basically, we’re all a bunch of shallow breathers.

This type of autopilot breathing pattern means you’re probably inhaling through the mouth, only taking in short breaths and therefore getting less oxygen. Doing this for long periods can keep your body in a cycle of stress, which has a knock-on effect on your physical and mental health. 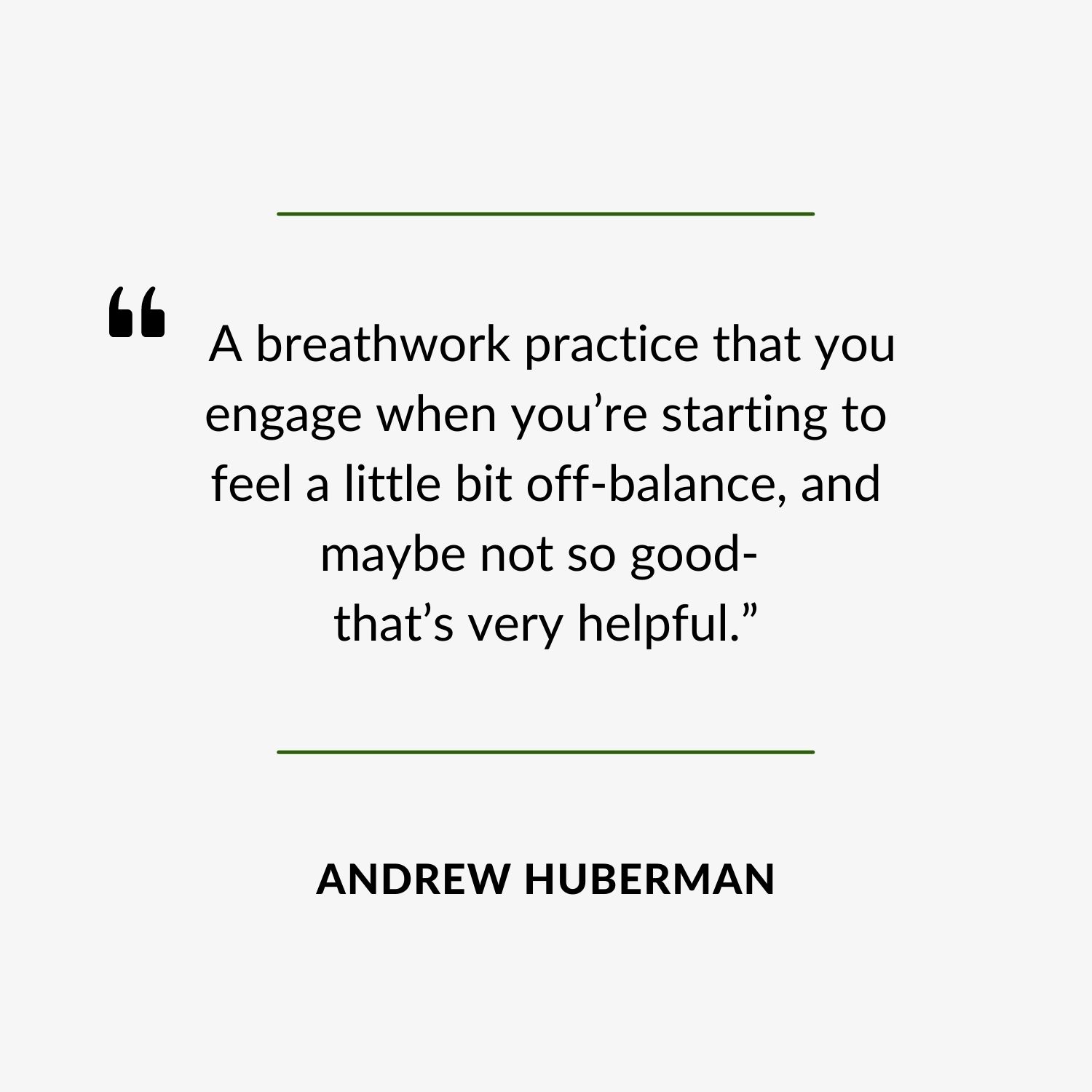 Think about it for a second. How often do you notice your breathing? Most of the time, we don’t even realize we’re doing it—it just sort of happens. We all know that breathing is essential for keeping us alive. But breathwork is a little more engaged than that. It is, in essence, the practice of manipulating your breath.

Intentional breathwork is a practice that has spanned millennia. There are many variations and styles. In the mainstream, it’s often associated with meditation and yogic practices. But ultimately, ALL types of breathwork get a person into the space of personal transformation. Either through improved mental, emotional, physical, or spiritual well-being.

For many people, the process of deep rhythmic breathing moves them out of fight or flight mode and into the parasympathetic nervous system. This system is responsible for the body’s rest and digestion response when the body is relaxed.

As Pulmonologist Dr. James Hoyt says, “Deep breaths are more efficient: they allow your body to fully exchange incoming oxygen with outgoing carbon dioxide. They have also been shown to slow the heartbeat, lower or stabilize blood pressure and lower stress.”

Who is Andrew Huberman?

When it comes to the neuroscience behind deep breathing practices, Andrew is the real deal. He is a neuroscientist and tenured professor in the Department of Neurobiology at Stanford University School of Medicine. He’s also the founder of Huberman Lab, where he explores brain function, brain plasticity (the brain’s ability to change as a result of experiences), and brain regeneration.

One of the more significant aspects he and his team research is stress reduction through deep breathing practices.

“We believe that people are teaching themselves to be calm, even when there’s that shot of adrenaline,” Andrew explains. “A breathwork practice that you engage when you’re starting to feel a little bit off balance and maybe not so good- that’s very helpful.”

Our respiratory system is amazing. It works hard to supply oxygen to cells while removing carbon dioxide waste from the body. As we breathe in, air comes in through the nose into the larynx. From there, it goes down the trachea and finally into the lungs through the bronchi. The bronchioles then pass on oxygen to the red blood cells for circulation.

However, when we experience stress or strong emotions, we can experience shortness of breath and rapid breathing. As the airway between the nose and the lungs tightens, it reduces the potential for oxygen to move around the body.

The Relaxing Science Behind Sighing

If you’re not good with small spaces, sighing might be your saving grace. Some fascinating research into claustrophobia has uncovered more information on a breathing pattern known as the physiological sigh. This sigh is triggered when someone is in a confined space. It occurs when carbon dioxide levels within your lungs and bloodstream are too high.

During periods of anxiety, this physiological sigh can help bring you down from that elevated state. By sighing, your heart rate, digestive system and respiratory rate can get back in sync. Scientifically speaking, it’s your body’s way of attempting to regulate the autonomic nervous system – the system that manages all of our unconscious bodily functions.

Funnily enough, animals do this right before they have a nap. And we do it too, particularly when we’re already asleep. “There’s a set of neurons in the brainstem that cause a double inhale, followed by an extended exhale,” Andrew explains. “If you want to calm down just a little bit, do a double inhale through the nose and exhale through the mouth.”

“That’s the fastest way I know to downshift the autonomic nervous system. Sometimes you only need to do that two or three times, and you’re completely relaxed.”

The Benefits of Deep Breathing

In 2017, an exciting study was published in the journal, Frontiers in Psychology. This research showed that those who completed just 20 breathwork sessions over eight weeks had significantly lowered their cortisol levels. Cortisol is responsible for our body’s stress response, and high levels of it can cause chronic inflammation.

“No one has to take anything. You can do it in the moment, and everyone has access,” Andrew explains. “The learning barrier is very low; you can just do it.”

How To Deep Breathe 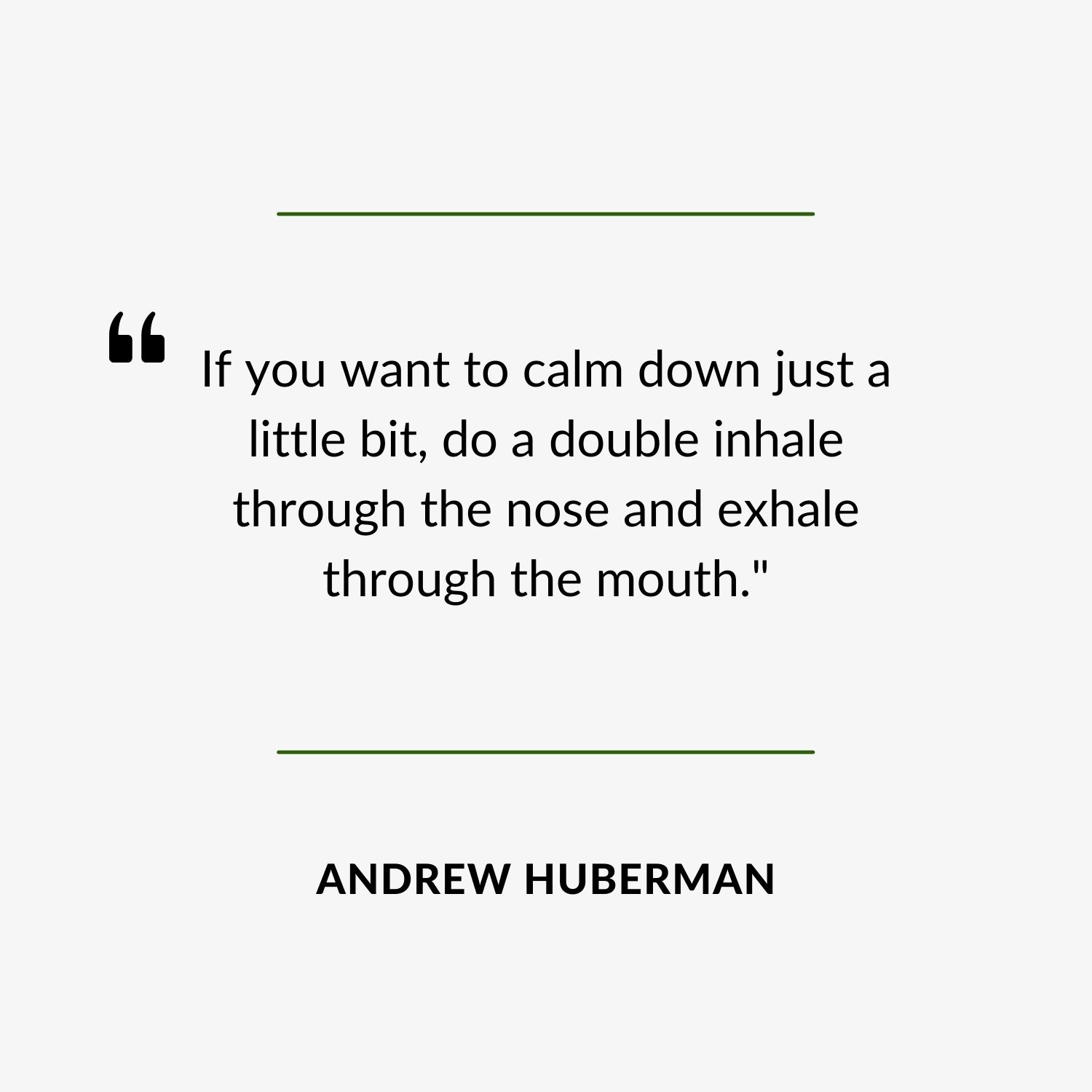 “A lot of people who are stressed, it’s hard for them to calm down,” explains Andrew. By engaging in some breathwork exercises you can release that store of adrenaline. I know what you’re thinking, how do I do this correctly?

Well, it’s not as hard as you may think. The next time you’re feeling stressed, Andrew suggests trying this simple breathing exercise.

By using these ancient breathing techniques, we can take charge of our emotional well-being. You can consciously choose a parasympathetic response (relaxed and resting) over a sympathetic flight or freeze response when faced with real, stressful challenges.

To hear more of my incredible conversation with Andrew Huberman, check out Episode 28 of The Darin Olien Show.