The Amazon rainforest has more than 80,000 plant species, with a staggering 40,000 of those playing a critical role in regulating the globe’s climate. For Westerners, about 25% of all modern drugs we use derive from rainforest plants- which is insane. Then there’s the added mind-bender that less than 5% of the Amazon’s plant species have been studied for their potential benefits as medicinal plants.

So, why am I talking about this? Well, plants can heal- not only the physical ailments we experience but also the psychological.

That’s where Carlos comes in.

I had an insightful conversation with my new buddy, Carlos Tanner. For anyone who loves a Netflix binge and has tuned in to the “Down To Earth” series (hosted by the affable Zac Efron and yours truly), you’ll probably recognize Carlos from the last episode of the first season.

He is the founder of The Ayahuasca Foundation, a non-profit organization based in Iquitos, Peru. They provide healing retreats and in-depth educational courses surrounding plant-based healing practices used by indigenous healers of the Peruvian Amazon. 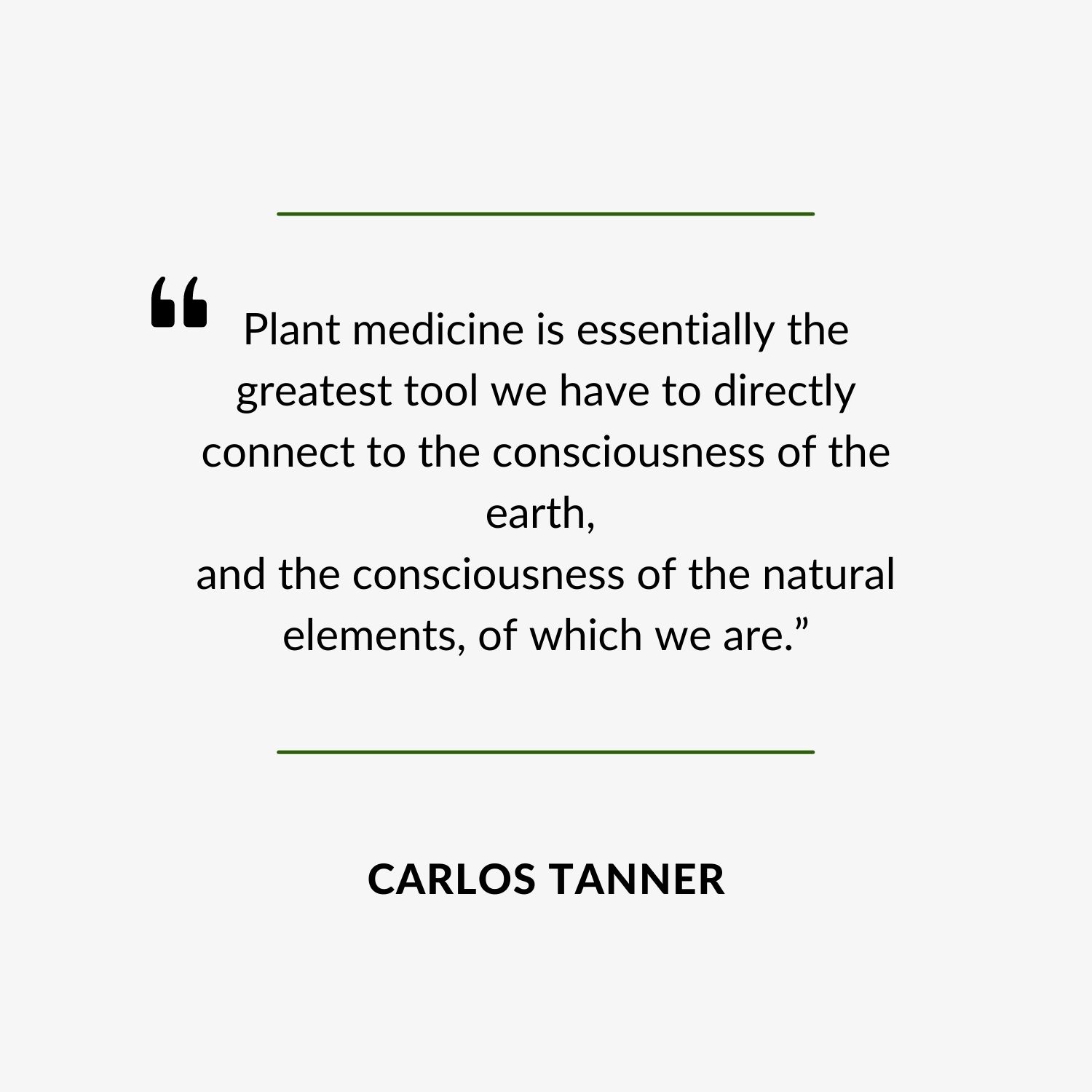 So, where did it all begin for Carlos?

Admittedly, he has always had a fascination with medicinal plants. However, it wasn’t until 1999 when Carlos was fresh out of college that things started to take off.

While he was ready and eager for a career change, he just needed to get by. So, like many college grads, he grabbed the first temp job he could.

For eight hours a day, he would sit in front of a computer, twiddling his thumbs, maybe fill in a crossword puzzle, and wait for someone to call so he could enter their details into a computer.

“That happened like once a day. I had seven hours out of my eight-hour day where I would have nothing to do,” says Carlos.

So, to make his time more valuable, he gave himself a project- to research medicinal plants. He studied, indexed, printed, and filed a whole heap of information about medicinal plants- and before he knew it, he was building up a secret library.

“There was one particular plant that definitely set itself apart from the rest, and that was ayahuasca,” he says, “I was so fascinated by it.”

In 2000, Carlos landed his ideal career. Initially, he was thrilled, but the honeymoon period didn’t last long. On paper, he was living the American dream: the house, the car, an excellent salary. But, inside, something was wrong.

“I started to get depressed,” Carlos says, “I began using drink more, using drugs, and eventually led to being an opiate addict. I wanted to be numb.”

The Addict, The Revelation, The Declaration

One morning, at 4 am, Carlos had a rude awakening.

The sensation of cold water swelling around his legs jolted him from what felt like deep sleep. He quickly realized that his car was heading to the depths of the Manhan River.

“I had water up to my chest; my windows were open, so the water was pouring in. I had no idea where I was,” Carlos explained.

That night was a late-night session of heavy drinking and pills. What happened when he got into his car to head home is still a blur. “I must have just blacked out,” he exclaimed. “I drove through this like swamp, which had water like two feet and then through a cornfield, and then into a river.”

“It really freaked me out; I could have died.”

Luckily, he escaped without injury, clambering to shore only to watch his car slowly sink into the cold, murky water.

At that point, he didn’t care about his job anymore; it was his life that mattered the most. “I knew I had to do something life-changing.”

Serendipitously, within a few days, Carlos received an email from an old friend asking him if he wanted to go to Peru to fulfill his dream of trying ayahuasca. His call to the universe had been answered, and he jumped at the chance.

“I knew that was going to change my life.” 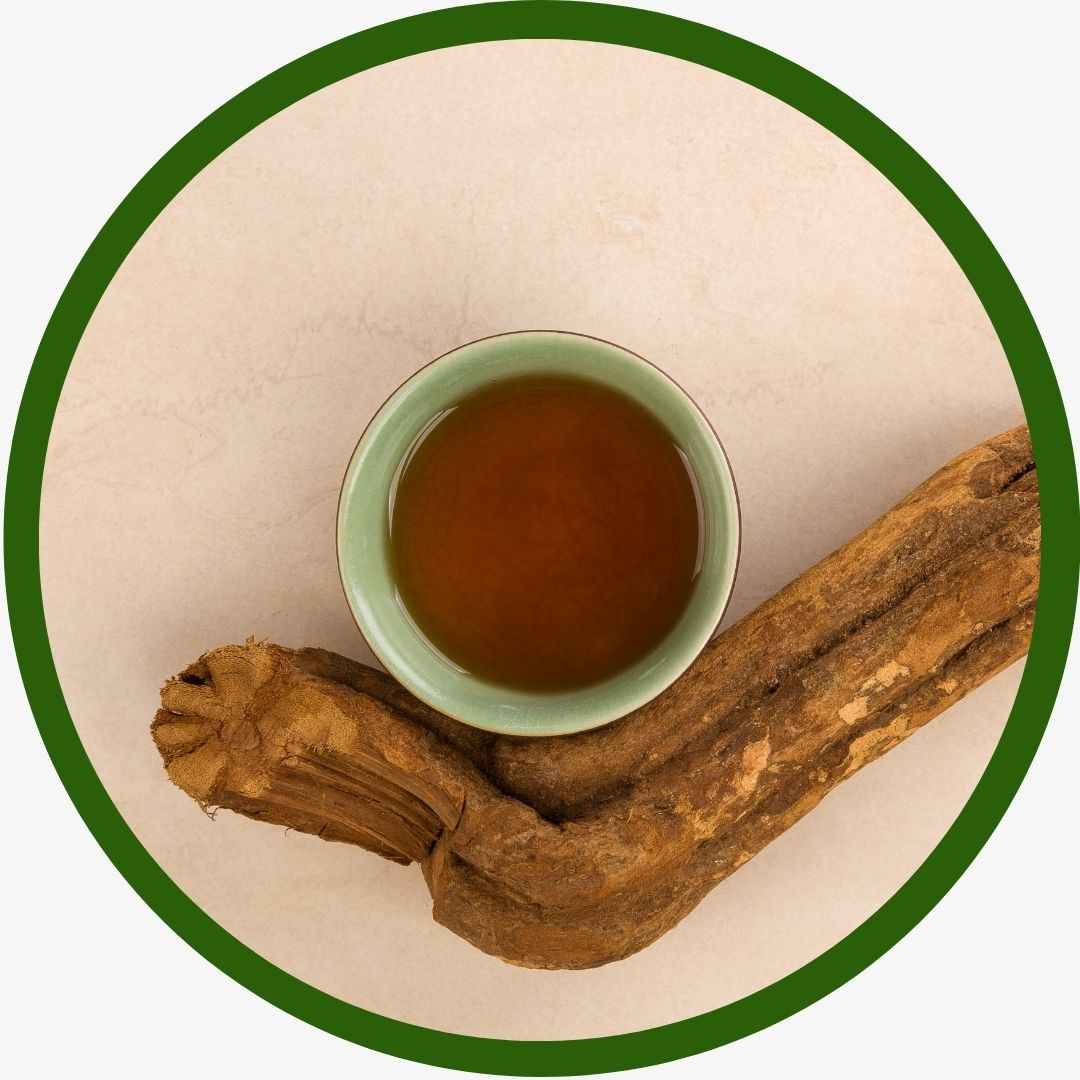 Ayahuasca (pronounced ‘eye-ah-WAH-ska’) is an ancient ceremonial, psychoactive brew that originated in the Amazon Basin more than 10,000 years ago.

This tea is made from two medicinal plants – the Ayahuasca vine (Banasteriopsis Caapi) and the leaves of the Chacruna plant (Psychotria Viridis). It is consumed in a ceremonial setting under the watchful eye of a Curandero (shaman).

Ayahuasca is typically known for causing hallucinations, and an altered state of consciousness, including out-of-body experiences and euphoria.

However, while most people take it to expand their minds and dive deeper into their psyche, there are some powerful side effects behind this brown brew. Fear, paranoia, vomiting, and diarrhea are all part of the package.

“I threw up like 15 times. I crapped my pants at one point,” says Carlos, reminiscing about his first experience. While that all seems terrifying and a bit messy, the traditional purpose is to purge. From that, you can gain greater guidance and insight from your hallucinations.

“The thing to remember is, whatever you put into it, you’ll get out of it,” says Carlos. “I needed to have my life saved, and that’s what I was putting into it.”

“There’s messaging; there’s communication that happens in these ceremonies,” he says. “In an Ayahuasca ceremony, if you go into it with the wrong attitude, Ayahuasca will kick your ass.” 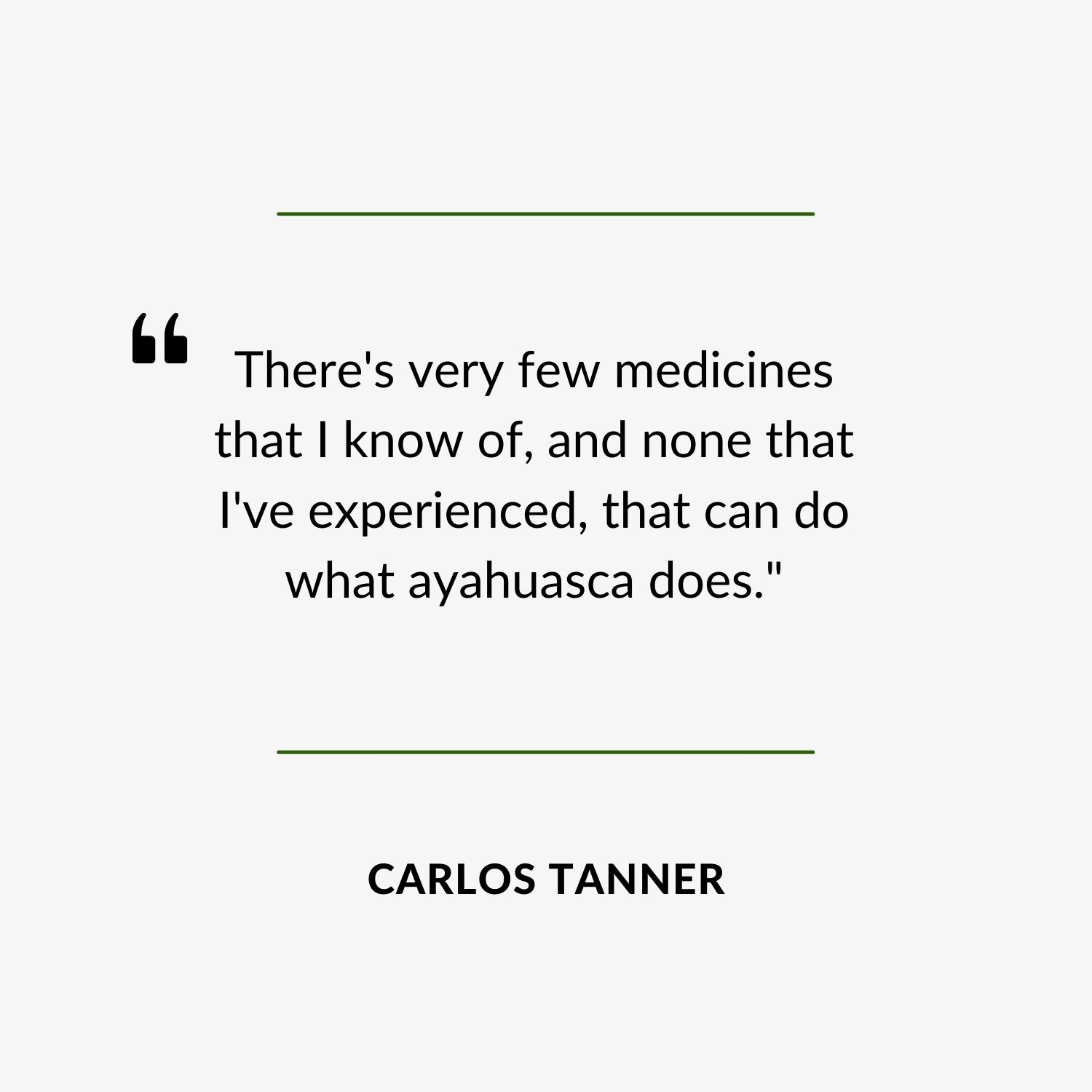 While many psychoactive, medicinal plants and brews such as ayahuasca are registered illegal within most Western countries, there is a growing body of research into how effective they can be in helping with both physical and mental health.

“There are very few medicines that I know of and none that I’ve experienced that can do what ayahuasca does,”  explains Carlos.

What’s most surprising is the wealth of degree programs that are starting to become available, giving people the rare opportunity to become a certified psychedelic therapist.

“That, to me, speaks to something really important,” Carlos explains.

If properly used, medicinal plants can be a revelation when healing and restoring physical and mental well-being, especially when modern-day conventional medicine isn’t working. But, we’re only scratching the surface on their potential. That’s why more research is needed. Thankfully, we have people like Carlos investing their time and resources into researching these plants while maintaining the valuable traditions of the people who have been unlocking their power for millennia.

To find out more about about my wild conversation with Carlos’ click here.

Darin Olien does not encourage any illegal use or abuse of plant medicines and psychedelics, whether cultivated in nature or lab synthesized. Within the U.S., outside of religious ceremonies that include Ayahuasca, DMT, on its own, is an illegal Schedule I Controlled Substance.

It is advised that any individual wanting to use plant medicines should seek the advice of a licensed professional, as well as research laws and regulations surrounding plant-based medicines within their area.