Why We Should All Learn to be More Self-Sufficient

Posted at 05:00h in Blogs, Motivation by Kaili Bonnyman 0 Comments

When the pandemic hit, everyone became painfully aware of how reliant they were on grocery stores, online delivery services and other outside goods and retailers. Or for those of us in society who were already prepping for the unexpected, we became aware of just how self-sufficient we were. There can be a happy medium, guys. You don’t have to be a doomsday prepper in order to be prepared for unexpected events like weather disasters or pandemics. We all should be learning to be as self-sufficient as possible.

I sat down with the author of No Grid Survival Projects, Michael Major. He knows a thing or two about being self-sufficient. Michael’s book contains over 70 DIY projects designed to increase your self-sufficiency in a disaster or unexpected event. He’s also a regular contributor to Ask a Prepper, where he writes on topics relating to prepping and survival. On top of that, Michael has written for several Canadian outdoors magazines. His research for his writing projects led to him developing and teaching an outdoor safety course for the British Columbia Wildlife Federation.

Prepping Gets a Bad Wrap 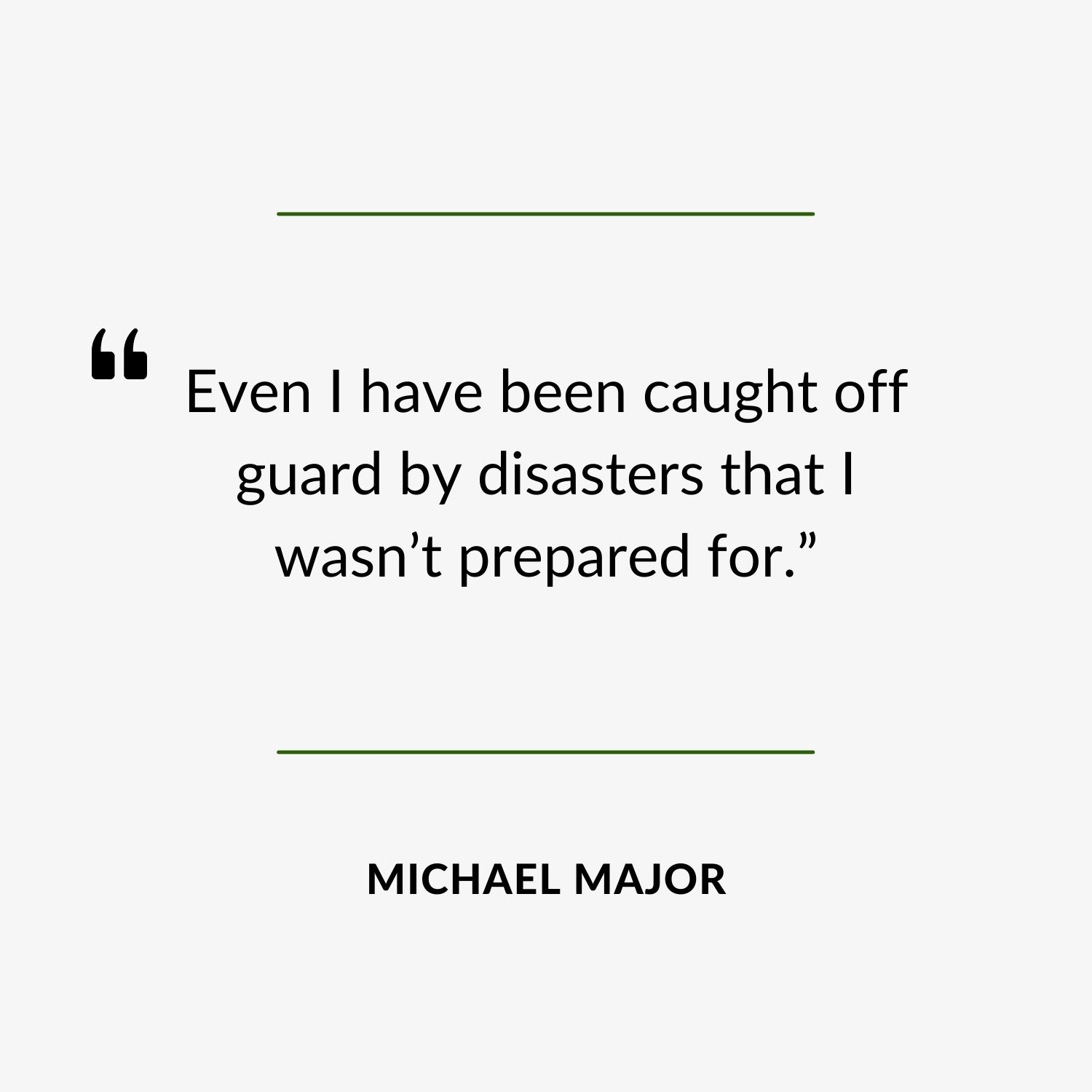 When I say “prepper”, what comes to mind? Do you think of a man dressed head to toe in camouflage stocking his basement full of canned chili to prepare for the apocalypse? Don’t worry, you’re not alone. I think the majority of people who prepare for the unexpected are misunderstood. The truth is, weather disasters like earthquakes, fires, or tornadoes happen all the time in our country. And everytime they do, we see people on the news saying “We never expected something like this to happen here, we weren’t prepared.” That’s where people like Michael come in. He wants us all to learn to be more self-sufficient, so that when the unexpected does happen (which it will, in some form), there won’t be cause for panic.

According to Michael, the first step is to be more aware of the kinds of natural disasters that could happen locally.  “What could happen in my area?,” he says. For me in California, I obviously have to prepare for wildfires, earthquakes and draughts. If you’re in the midwest, you’d have to be prepared for flooding and tornados. It’s all about what’s most likely to happen where you are now. And the easiest way to start prepping is to start a small stockpile for you and your family. No, you don’t have to store 200 pounds of rice in your garage. But enough food to get you and your family through a couple weeks is a good starting point. “It’s as simple as buying an extra thing at the grocery store each time,” Michael said.

Starting a small stockpile of non-perishables is always a great idea, but you guys know how I feel about canned food. So, if you’re able, canning your own fruits, vegetables and sauces is also a great way to create a healthy stockpile that you can feel good about! And like Michael says, “It’s about empowerment. It’s not so much about stock, it’s about skills.”

Being Self-Sufficient for Food & Water

One point that I can’t stress enough, and one that Michael brought up as well, is that growing your own food is the number one way to become more self-sufficient. While we may not all have access to enough land to start a vegetable garden, there are small ways to grow your own food. Michael suggests starting a herb garden on your windowsill for starters. Seeds, even organic, non GMO seeds are relatively inexpensive, as is dirt and supplies. All you need is small, ventable containers, seeds and little dirt and tada! Fresh, homegrown herbs to cook and make tea with.

Not only is home grown food better for you, but as you’re learning and growing season after season, you’re becoming more self-sufficient without even realizing it. Because growing food on your own takes a lot of trial and error. Through that trial and error, you gain knowledge and experience to do it better each time. AND, you can pass that knowledge on down to your kids, friends and family. That’s how you help your entire community become more self-sufficient!

Now, you can stockpile all the food you want, but it’s not going to make a difference if you run out of clean water. That’s why Michael is constantly coming up with resourceful ways to reserve and clean water for emergencies. And he stresses that even if you live in a small space, you can find ways to reserve water. Making a rain barrel is the easiest way to start conserving water. While there are plenty of options for rain barrels at home improvement stores, you could start small with just a bucket out the window during a rainstorm. You could filter that water to drink, or use it to water your herb garden! While you’ll have to think bigger in terms of survival in a disaster, it’s important to start somewhere.

If becoming self-reliant for food and water seems a bit overwhelming, don’t worry. The goal is to become more skilled for survival by learning a little at a time. All you really need to do to become more self-sufficient is to start doing more things yourself. “That’s the first thing to do,” Michael said. “Stop relying on other people– give it a shot yourself first.”

So your sink is leaking? Before you call the plumber, watch a few YouTube videos and see if you can fix it yourself first. Need a new storage area for your homemade jarred pasta sauce? Before you run to IKEA, see if you could use the wood in the garage to build some shelves. The more self-reliant you can be in your everyday life, the more likely you’ll be able to be self-sufficient in the event of a disaster.

To hear more about ways you can prepare for the unexpected,

check out my full conversation with Michael Major on The Darin Olien Show.