Turning Childhood Abuse Into Your Why | Tom “Quitproof” Jones

29 Dec Turning Childhood Abuse Into Your Why | Tom “Quitproof” Jones

When you endure unimaginable abuse in your childhood, how do you move past that pain? While different people may have different answers to that question, one way to heal is to help others heal as well. 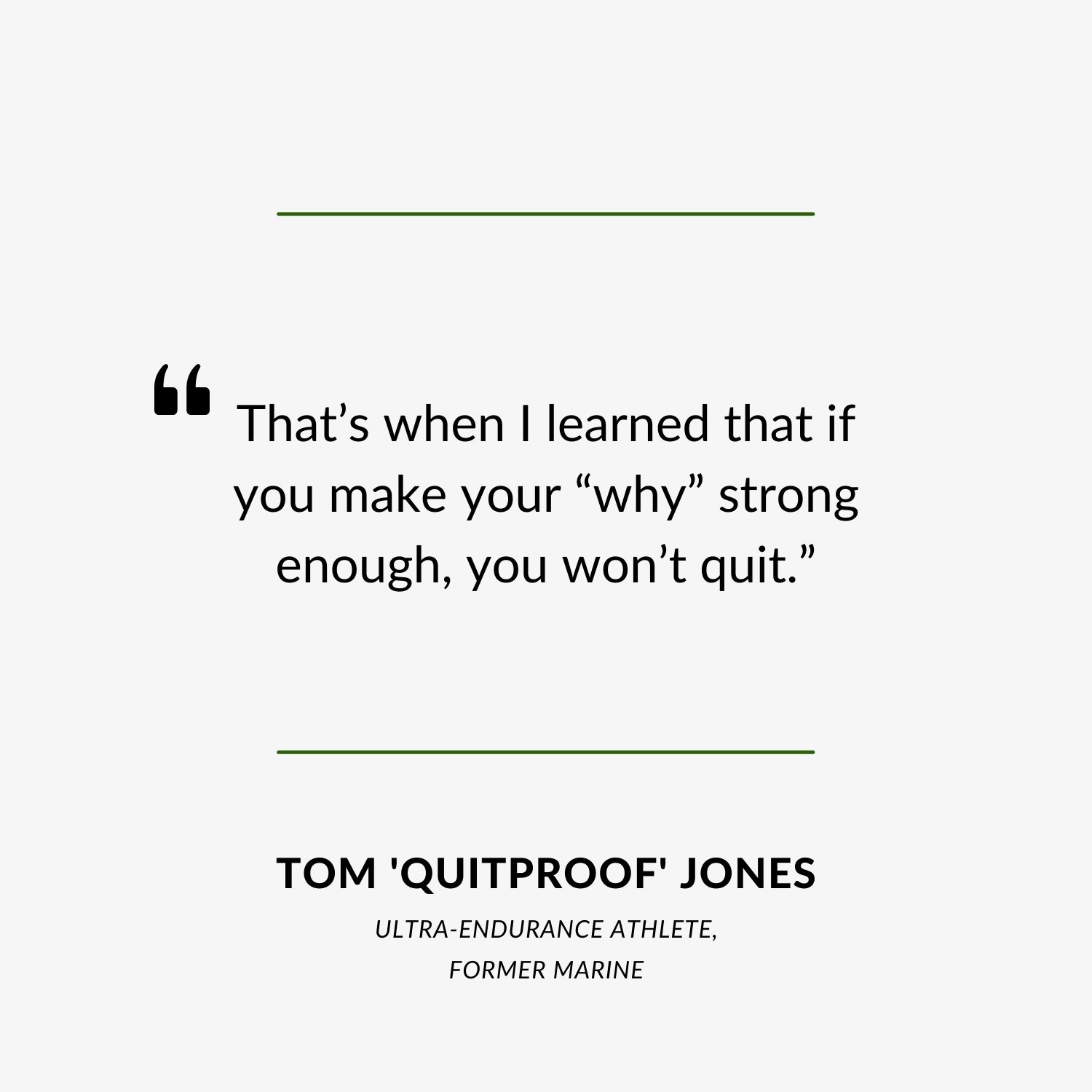 So who is Tom? Well, he’s the best athlete you’ve never heard of. Holding multiple World Titles in explosive sports and World Records in Ultra Endurance Sports, Tom is one of those guys that just never quits. I mean, he ran 121 marathons in 121 days for Pete’s sake! Besides superhuman strength, Tom is driven by heart. But behind that heart is a whole lot of pain- pain caused by abuse.

Setting out to be candid about his past, Tom dove into some pretty heavy stuff about his childhood. Growing up with a terminally ill father and mentally unstable mother, Tom was subjected to horrific abuse. But when he was finally taken from his home by the state of California, the abuse did not end there. At the hands of those that were supposed to protect him, Tom endured the worst kind of abuse you can imagine behind the doors of a children’s home- childhood sexual abuse.

But not only is Tom a survivor, he’s a fighter. So after joining the Marine Corp, where he excelled, Tom picked up martial arts. Fighting was a way to work through his anger, but it didn’t leave him fulfilled like he had imagined. It wasn’t until Tom began using his athleticism to support children healing from abuse that he found his “why”. After taking his fight to court to permanently shut down the children’s institution where he experienced the worst of his abuse, Tom is still fighting. Everything he’s done up until this point, and everything he will do in the future is to help kids like him.

Although Tom doesn’t give details of the abuse he endured, I must warn you that this may be a triggering episode. But if you yourself have experienced physical, emotional or sexual abuse as a child, this could be a healing conversation to listen to. Tom uses his memories, his pain, his abuse, as his “why”. I hope he inspires you to find your own why, and facilitate your own healing. You are worthy, you are strong and you are able- you are not your pain. But your pain could be your fuel.

Join my Superlife Camp– All you need is 21 days to transform your lifestyle. I’ll give you delicious recipes and access to online meetups where we’ll hold each accountable on our journey to a strong, healthy relisant life. Secure your spot today!

Barukas Nuts – Get 15% off your order of the best nuts on the planet while helping to end deforestation and support the indegenious tribes of the region.