We all make mistakes. And we all have a past. Sometimes it’s hard to see the light at the end of the tunnel if we’re used to making choices from a victim mentality. The things that happen to us when we’re younger are not our fault. But, as an adult, you are responsible for your own healing, and your own growth. The decisions we make are ours alone.

On a recent episode of The Darin Olien Show, I got to sit down with the inspiring Doug Bopst. Doug’s story is something that needs to be heard. Because I know there are so many people out there that think they’re defined by the choices of their past. I’m here to tell you, with Doug’s help, that it’s the choices you make going forward that matter.

Doug is an award-winning personal trainer, author, speaker and podcast host. But before that, he was a drug addict and a drug dealer. After a judge found him guilty of “possession with intent to sell,” Doug served several months in prison. But a conversation with his cellmate changed everything. 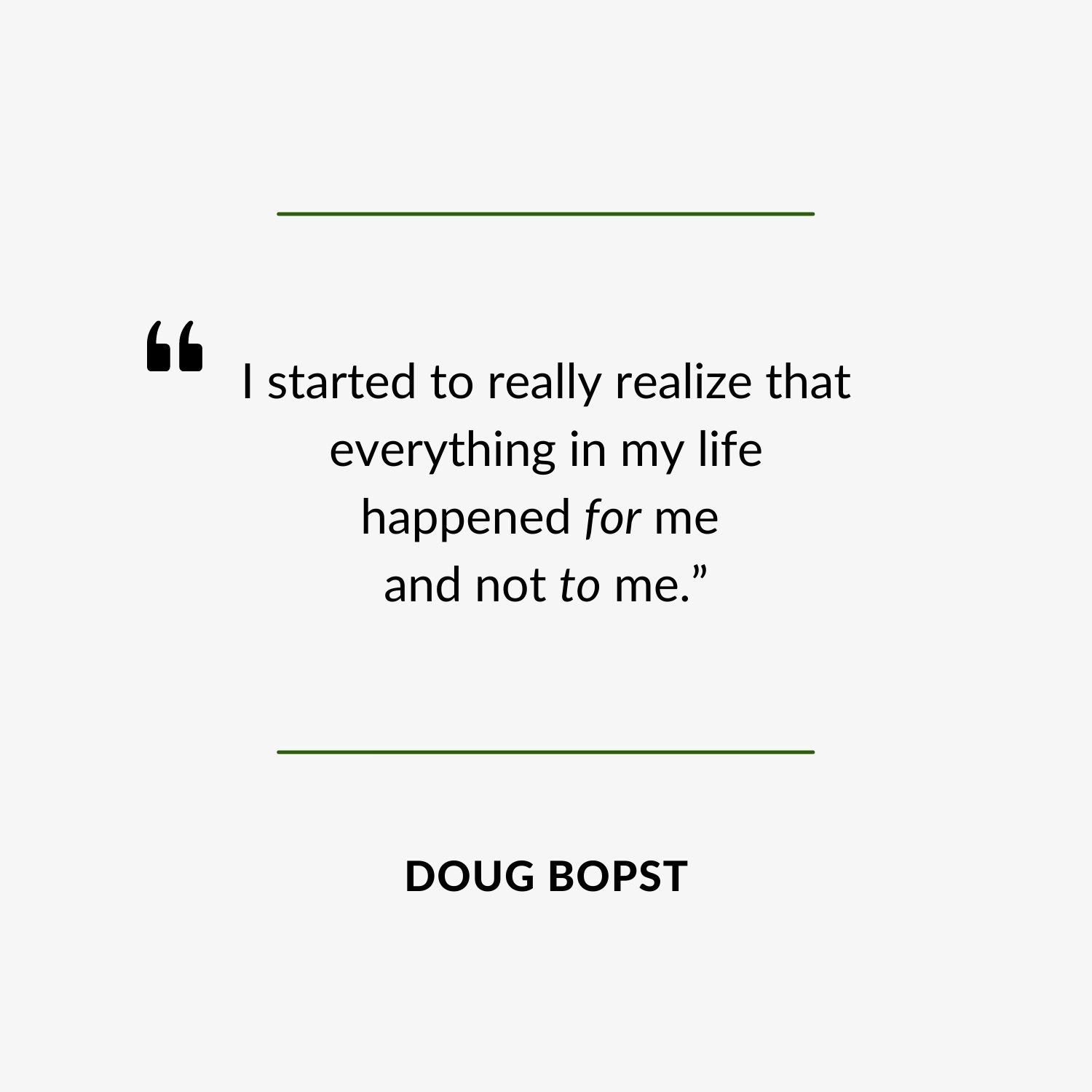 Before we get to that fateful conversation, I want to tell you a bit about Doug’s past. By his own account, he had it rough. Constantly bullied by classmates, and reeling from his parents’ divorce, Doug never learned how to handle his stress in a healthy way. “I just got to a point where I was doing everything wrong to manage stress, to manage my anxiety, my insecurities, my traumas,” he said.

When he hit his teen years, Doug, like so many troubled kids like him, turned to drugs. It wasn’t long before casual marijuana use turned to pain pills, and then cocaine. Then a few years later, Doug was pulled over and arrested for “possession with intent to sell”. That charge led to a 90-day stint in jail.

Hey, man. What are you in here for?

At the time of his arrest, Doug was addicted to Oxycontin. He was forced to detox, cold turkey, in his jail cell. Pain, nausea and a whole list of nasty withdrawal symptoms were the literal signs of hitting rock bottom. But a conversation with his cellmate changed everything.

After sharing his story with him, the cellmate said “You gotta quit being a bitch. You got yourself here.” As much as those words stung, he was right. And Doug knew it. The cellmate continued to explain that you can’t blame everyone else for your problems. At some point, it becomes your responsibility to deal with your own sh*t. You are the only one making your choices.

After this epic conversation that shifted Doug’s entire perspective, his cellmate challenged him to work out with him. So he did. And he kept working out with him every day. Doug credits fitness for changing the entire trajectory of his life. “Life is about making choices. I chose to deal with my circumstances in a really unhealthy way. I chose to deal with my trauma and my anxiety and depression in some horrific manners. But I also chose in jail that I was never again going to do that.,” Doug explained.

A Bumpy Road Ahead

Of course, that wasn’t the end of Doug’s story. Recovery is never a straight line. “I thought that just fitness, and just being clean from drugs and changing my friends was the key to everything as far as being happy,” Doug said. “The problem was, I was still spiritually broken inside. I still had all this regret, all this shame.”

Doug is a work in progress, as we all are. He works on his relationships, his spirituality, his emotional health, every single day. He does all this by making conscious choices, deciding what he wants – to grow and evolve and continue looking forward –  and what he doesn’t want – to regress, to regret and wallow in shame- and he makes choices accordingly. “I started to really realize that everything in my life happened for me and not to me, “ he said.

To hear more of this amazing conversation with Doug, check out episode #44 of The Darin Olien Show – Doug Bopst on Doing Time and Changing Lives.